When our little girl was born in late-2007 we lived in SE London and planned a home birth. A nice, big inflatable birthing pool; soft music; candle light; aromatherapy oils; and as few drugs as possible, just a couple of canisters of gas & air and some paracetamol to ‘take the edge off’.
Contractions started on a Thursday. Our baby was born at 7am on Monday morning. In hospital. After my wife had breathed gas & air for 56 hours and had 2x pethidine injections. Plus an epidural. Like Mike Tyson said, “Everyone has a plan until they get punched in the mouth.” Or contracted in the cervix for 72 hours.

Our experience has been that anti-natal classes are quite scornful of drug-use during labour and that midwives seem to very reluctant to offer epidurals. Even during such a tough labour I had to do an excessive amount of midwife-badgering to get the epidural requested. After that it took 11 hours to get an anaesthetist and a doctor available at the same time to come do the job.

We found out later that NHS hospitals have targets around maximum numbers of epidurals, hence the discouragement from midwives. And part of the issue with getting a doctor and an anaesthetist was because of it being Sunday, when there’s less staff. Someone should tell the uteruses about rostering.

Once it was clear that my little girl had 10x fingers and 10x toes, my main concern was leaving the hospital with the right baby.
Yes, supporting my exhausted wife was important, but I’d seen loads of American TV shows with 20 seemingly-identical new-borns in matrix-formation behind a pane of glass, just one disgruntled hospital worker away from being shuffled. And I’d read about the two Eastern European families finding out 3 years later that they’d each been bringing up the wrong kid. I wasn’t taking my eyes off our little one for a second.
Paul Daniels could have come in with two other babies, covered the three of them with oversized plastic cups and shuffled frantically. I’d still be leaving with the one my wife pushed out.

As it goes they get wrist/ankle name-tags pretty quickly. And there’s no American-style baby showroom. That said, a couple of years later when our little boy was born, I noticed all his tags had fallen off. Spotting one wedged down the side of his little cot, I pulled it out and put it back on his wrist. My wife later pointed out that it read “Little Girl Wójcik”. I went back on correct-baby vigil. 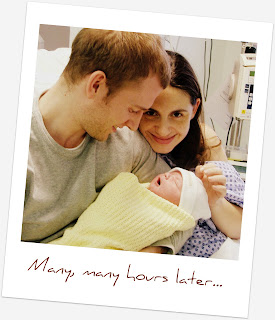 I cut the umbilical cord of both our children. Not really out of any need to get more involved in the process, though that was nice. Largely just so that, in the future, when the kids won’t do as they’re told I can say, “Show some respect. If it weren’t for Captain Freedom here, you’d
still be dangling off your mum”.

After the labour of labour it was nice for my wife to get looked after in hospital (and for me to catch up on sleep at home) for a day. But after the births of both our kids we were pretty eager to get the enlarged team back to our house. And to our awaiting lifestyle changes…

Learned Wisdoms
#4: During labour, be prepared for crazy talk after a decent stint on gas & air. My first experience of this was my wife’s vehement and surprisingly accurate deconstruction of British rugby’s inability to develop the strength in-depth in key positions, which ultimately led to England’s 2007 Rugby World Cup final defeat. She didn’t watch the final. And openly has no knowledge of or interest in rugby union. Later she expressed concerns at having to give birth to the twins… believing she was about to deliver her 34 year old brother-in-law Ali and his twin brother Benny. “I don’t mind about Ali, but I don’t even know Benny that well”. Tremendous.

#5: Having an additional birthing partner (my wife’s sister) made our second labour much easier. I was able to focus all my attention on supporting my wife, while her sis took the role of convincing our midwife to request an epidural (after a business plan pitch, a cash-bribe and an attempt at hypnosis had all failed, a dossier of compromising photographs from the midwife’s college days finally provided the necessary leverage). Then later, keeping the waiting doctor from leaving until the anaesthetist finally arrived.

#6: One thing no-one tells you about childbirth is the swollen genitals. They’re disproportionately large at birth due to hormones in the womb and ‘science’. They really should mention this in the anti-natal classes (maybe instead of the ‘drugs are bad’ bit). At my little boy’s birth my train-of-thought as he came out was, “It’s a boy… wow… f*ck… it’s definitely not mine.”
Posted by dadulthood

Email ThisBlogThis!Share to TwitterShare to FacebookShare to Pinterest
Labels: Birth