Our daughter will start school next year and my wife and I are currently debating the state vs private options for our kids....

My wife got a scholarship to a private school for 6th form and subsequently went on to Oxford University. She’s had great career opportunities as a result. Also I obviously like her personality quite a lot, which has gone some way to conquering my sweeping prejudice that all people who attended private school have a slightly anti-social sense of entitlement and get crippling panic attacks if they find themselves more than two meters from a deck shoe.

I went to a comprehensive in Bradford. And initially felt uncomfortable that going to private school would be yet another way that my kids are different to me…
- I was genetically squashed by my wife in our children’s features and appearance;
- Having been born in London, the kids are Southern. Unlikely to support Huddersfield Town and, worse still, I caught my daughter pronouncing it “grarse” recently;
- I didn’t know what pesto was until I was about 25 – it’s currently my 1yr-old son’s favourite food
… until I realised that (see Learned Wisdoms #21 below) I don’t actually want my children to be the same as me. I want them to be better*. And school choice is probably the biggest life-shaping lever we have for the kids outside our direct relationship and interactions with them.
In theory at least, they should have more career and lifestyle choices if they get a better education.
As is the case in most of London, the schools we’re in catchment for are a real mixed-bag with staggering competition for the decent ones (which is what led us to start thinking about private in the first place). Plus, private schools generally have better sports and extra-curricular facilities/programmes (something that was a significant frustration for me growing up at state school).


On the other hand, from my own experience, I think there’s a lot to be said for a down-to-earth upbringing, having to overcome challenges along the way, and not being surrounded solely by people called Tarquin and Sebastian**. So, despite The Daily Mail trying to convince everyone that going to a comprehensive school in London will mean our kids have to run a gauntlet of stabbings for the chance to achieve impregnation and secure their genetic succession at the age of 13, I’d like them to do at least some of their education through the state route. Which, to avoid new kid stigma and name-calling (especially as we unwisely named them Yagina and Resticle), probably means state primary school then moving to priva 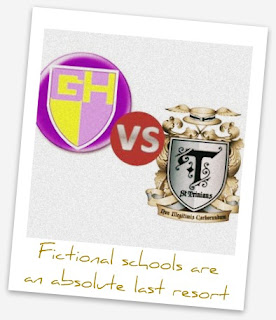 te as they make the switch to secondary.

So that’s the plan at the moment. Just one more thing – how are we going to afford private school fees?  Not 100% clear as yet. We’ve had a look at what current luxuries we’d probably need to cut out and roughly where we’d need to get our salaries to over the next few years. They seem to be attainable-but-significantly-challenging targets… though if my blog posts suddenly dry up you can assume that taking part in medical experiments and selling organs doesn’t leave the necessary time or life-force for writing.


Learned Wisdoms
#21: While we all know that you shouldn’t put undue pressure on your children or have unrealistic expectations of their capabilities, you will occasionally falter. Prepare for disappointment when, during the ear test in your daughter’s first month of life, the result comes back normal after you’ve inexplicably started to expect that the healthcare person is about to recoil and quietly utter “It appears that your child has something approaching… super hearing.”

#22: Even if you go to a church that happens to be associated with an excellent non-pay primary school, be aware that there will still be a lot of competition to hit the selection criteria:
- Having siblings already at the school (which apparently only leaves another 4-5 spaces each year): Unless we attempt some sort of hostile adoption, we’ve got no shot on this one.
- Being regular-attending and active members of the church congregation: We do our bit, but I have never seen such a busy and busting congregation… suspiciously skewed towards young middle-class parents
- Proximity of your address to the school: We don’t live ultra-near. (And I can confirm that bribing crows to fly by more favourable routes is impossible)
Funny piece about trying to get your children into the best local school in this episode of Stewart Lee’s Comedy Vehicle (from 04:20)

#23: With many people having funded their children’s private education by re-mortgaging during the housing boom, its decline may have reduced the number of families able to stretch to school fees. So supply & demand notions might mean it’s worth getting your negotiating trousers on for conversations with private schools.
If you’re not a natural negotiator (for example, maybe you once found a massive disgusting hair in a chapatti and, after talking to the restaurant management, agreed the position of getting zero pounds taken off the bill and actually paying more for an additional chapatti to replace the hairy one), then it might be worth getting some tips in advance.


* Though I’d settle for them being happy and living the lives that they want. (I suppose)
** Another sweeping generalisation, which my ex-private-school-going mate Matt picked me up on last night at football (having annoyingly defied my lazy stereotypes already by being much better than me at that)
Posted by dadulthood

Email ThisBlogThis!Share to TwitterShare to FacebookShare to Pinterest
Labels: School