My wife would like to get a playhouse for our kids in the garden. We’ve talked about it a few times and I‘ve always been very negative about the idea without really knowing why. When she pushed for my rationale the justification finally popped out from deep in my subconscious… “Because a vagrant will use it as a toilet”. [Insert your own confused silence. We both did]

I do tend to see all the potential problems with a thing/scenario, rather than focusing on the likely positives. This can be useful at work and in other circumstances where it gives the chance to mitigate probable issues. But it does mean I’ve got more concerns floating about my head each day than anyone reasonably needs. (I spent a whole commute last week considering how I’ll cope when I someday get sent to prison for a crime I didn’t commit.)

However it turned out that my vagabond-dung-angst was actually based on life experience - when I was growing up, a hobo did once sleep in our back garden and extensively fertilized our back doorstep.

But discovering the odd smelly surprise probably never really hurt anyone. Maybe it's even character building. It would obviously be really nice for the kids to have a playhouse. And I refuse to live in fear. It’s like the war on terror*. If we’re scared to go on buying playhouses as normal, then the pooping-drifters win.

Another slightly more likely unlikely scenario, given their huge numbers in our area and recent instances of attacks on humans, is that one morning my little boy opens the playhouse door to find a bewildered fox in th 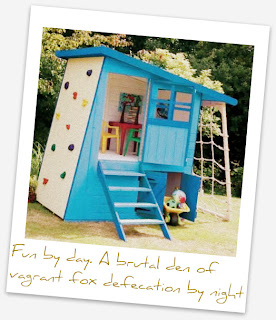 ere. Still a long-shot though - I just did a google search for "Playhouse Fox Incident" and found no wendyhouse-specific cases to back up my apprehensions.
(And if you ever get a pub quiz question “Who did special effects for the 'Without Incident' episode of 1950s TV show Playhouse 90?”, I can tell you the answer is Jim Fox.)

So we’re going for it. We are going to get a playhouse. And if my irrational worries mean getting up every morning to check it for tramps, angry foxes, and miscellaneous faeces before letting my kids into the garden, then that is what I shall do. For I love my children. And I am free man… (At least until that crime I didn’t commit thing happens.)


Learned Wisdoms
#24: If your mother-in-law ever asks you why there’s such a big lock on your shed door, just say it was the only one you had lying around when you put your shed up. Don’t say “Because I’m psychologically scarred by a childhood incident and believe that, every chance they get, beggars will spread their cack over all my things. More tea?”

#25: Once you’ve got the kids to bed on evenings when your wife is working late, if you spend your spare time writing and working out, you’ll be slightly disconcerted to notice that you’ve already gravitated naturally towards using rec time for hobbies you’ll be able to continue once you’re wrongly imprisoned.

* Yes. This matter is just like 21st century world issues with terrorism

Email ThisBlogThis!Share to TwitterShare to FacebookShare to Pinterest
Labels: House & Home, Quite Random