All These Things That I've Done

I’m pretty clued-up on the parenting techniques. I’ve read some of those books they have nowadays. I know my naughty steps from my reward charts. I‘ve got solid game.
But occasionally - when I need just a second in-amongst the constant questioning and play-demands, or if I’m in a situation where I urgently need to quell crying and get the kids to do/stop doing something – then, just occasionally, I have done the odd thing that Supernanny or the Baby Whisperer would frown upon.

I’ve listed some I can think of off the top of my head. I’m pretty sure we all do this sort of thing occasionally*.  And seeing my list of rogue moments might make you feel less guilty if/when you take the odd naughty (but entirely human) shortcut…

1. Trying to get out of the house in the morning. Made promises of future fun, contingent on doing-as-told now. “We’ll do xyz tonight if you get my phone out of your mouth and find your shoes”

2. Subsequently relied on the forgetfulness of tiny heads to avoid having to do xyz tonight

3. Used the promise/threat of Christmas presents to drive good behaviour. (And, with a little girl’s birthday in November, Q4 is generally a pretty easy stroll)

4. To avoid making a stop, used the old classic, “I’m afraid you can’t have an ice cream. You hear the van’s playing that music? It means they’ve run out”. (Was subsequently asked what a zooming fire engine had run out of)

5. Played hide & seek. But, as allocated seeker, sat down and read a magazine for the 5 mins it took the hiders to get suspicious

6. After dealing with the third set of wet/soiled pants in a 30 min period, left a potty-trainer roaming naked while I watched the early-Sunday edition of Match of the Day. Was only alerted to the pool of wee wee on the wooden floor by the loud crash as little feet ran into it and slipped over

7. Bribed crying child with sweets to subdue a public scene

8. In a rush, agreed to the bargain that toilet would only be sat on if hands did not subsequently have to get washed. (At least negotiating the counter-point that little hands be kept on head away from sticky 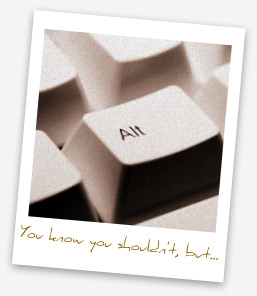 
These are rare** occasions, but still… Bribing with unhealthy food? Allowing non-hand washage? What’s next??
“If you stop crying/do xyz, then you don’t have to: wear a seatbelt / learn to read / avoid operating heavy machinery after alcohol”

The fact is, we all try to deal with our kids the best we can. But it's important for your own sanity to accept that you can’t do everything perfectly all the time, especially with the time-pressures working parents live under. (Just don’t ever make/read a list of your shortcuts. It really hurts your virtuous self-image)


Learned Wisdoms
#26: When your kids are very small, in the rush to get them out of the house in the mornings without tantrums, you may resort to the odd white lie (“We can’t watch TV now, but we’ll watch a whole film tonight.” “We can’t play dancing now, but if you’re good I’ll get you a… a giraffe.”), knowing they’ll have forgotten later. Be aware that your empire of deceit will crumble much sooner than you expect. After ~30 golden months, a little person will tell you, “No Daddy, I’m not going to bed. We’re staying up to watch Monsters Inc… why do you never get my giraffe?"

#27: If, while considering yourself a good and caring father, you write a whimsical post about the occasional shortcut you take with the kids and then read it back to find that listing all those things in one place suggests you’re actually (at best) a pretty lazy dad or (at worst) criminally-negligent, then it’s probably shrewd to imply somewhere that it was all exaggerated for increased amusement. Yes, it was a work of semi-fiction. That’s right.  Of course. [Single bead of sweat rolls down forehead]


* He said. Uncomfortably aware that “we” might not actually do this kind of thing at all. In fact, this might be the kind of thing that drives “we” to pitchfork-wielding angry-mob formation.