You Do It To Yourself, You Do

If you’ve never seen the video to the Radiohead track Just, then click here. It’s great. And a working knowledge of it is needed for this post to make any sense (... I don’t know how anyone expects to get the most out of the blog if they won’t do the set preparatory work)


A Coincidental & Mildly-Amusing* Thing That Happened
(* Given a somewhat-niche background knowledge of popular culture. And a pretty generous sense of humour)
My little boy does this thing when he gets tired or sad (or both), where he just lies down flat, silent and motionless on the floor. To an extent I admire him - if I wasn’t a slave to social conventions I’d probably do the same thing about three times a day - but it can be a bit embarrassing when we’re out & about. It's hard to project the image of a motivational parent, inspiring their kids' to great enthusiasm for life while you're stood over what's effectively a boy-skin rug.

So, we were at a birthday party the other week. There was a bouncy-castle. And food. And a rule that the castle would be deflated as soon as the children sat down to eat. (Shrewd stuff. I guess you don't spend too much time wiping partially-digested quavers/cheese/icing off your colourful vinyl before you see the value of introducing that one)
Food time came around. The castle went down. My little boy, tired from the frantic bouncing and sad that it was over, predictably slumped to the ground and laid quietly on the flattened jumpy-château.
A few other kids noticed him and wandered over. They had a little look at him. And then at each other... And then they all laid down!
I couldn't believe it. It made my day. I thought it was brilliant.
(Though I'm well aware that you might not. The octogenarian I was talking with at that point certainly didn't... but, I suppose, if you're a) not familiar with Radiohead, b) not interested in toddlery life-imitating-art coincidence, and c) not that welcoming of  any conversational-deviation from the impact of open-end spinning technology on the Yorkshire textile industry, then no amount of excited pointing and laughing on my part is going to convince you that this was a noteworthy moment) 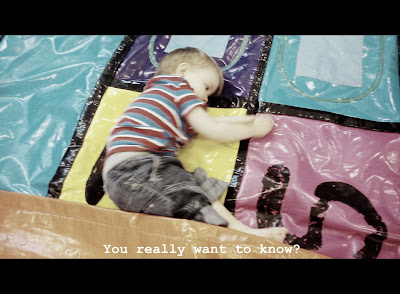 Future Opportunities
So there you go. The bloke in the video had been on a bouncy castle and was a bit tired and a bit sad. Or not.
Either way, my little boy's tendency to lie down where and whenever he wants resulted a nice little funny moment.
I'm now on the lookout for other scenes from popular culture that the kids could be nudged towards re-staging in miniature...
My daughter loves climbing. And she carries her little toy monkey everywhere with her. If anyone needs us, we'll be at the nearest model village until a small-scale bizarro-King Kong moment ensues. 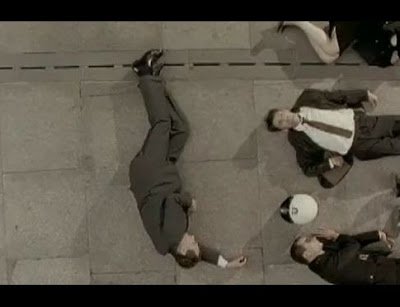 #30: When your little boy suddenly vanishes inside your house, you will be relatively comfortable that he can't have got far (once it's clear that the doors are locked and that his passport & tricycle are still there). However, until you actually find him, it will be very stressful. So, if he is known to have a penchant for lying-down flat and motionless for significant periods of time, it will save you a frantic 6-to-7 mins of confusion if you check under the duvet of your bed right away.
Posted by dadulthood