Colour My Life With The Chaos Of (Double) Trouble

It was my wife’s birthday party the other weekend. I was up with the kids the morning after. Feeding them, dressing them and playing with them… whilst trying really hard not to lie down, moan and pass out. It made me think back to how different things were when we only had one child…
Getting pregnant the second time meant there would be a sibling for our little girl. (Plus it was nice to know everything was still working after another couple of years of keeping a mobile phone next to my genitals.) And I figured that, once you’re used to the lifestyle-restrictions of having one child, throwing another into the mix would probably be easy-peasy lemon-squeezy. I was wrong. It's difficult-difficult lemon-difficult.

Within hours of our little boy being born we got the first sign of trouble. My wife and our new-born had to move wards through the maze of hospital corridors. They were pushed in a wheelchair by a busy porter. I had hands-full carrying  all the gear we’d brought to the hospital. And our little girl was riding a scooter that the new baby had given her (see Learned Wisdoms #28 below). She soon decided that following was a bit rubbish and shot off down a random corridor. The porter was too busy to wait and carried on with wife and baby boy. I couldn’t chase her while carrying all the gear and had to drop it to run after her. Once the fugitive was detained, it was hard enough finding our way back to the bags, never mind to the rest of our family, and we spent 15 mins walking the hospital corridors like a father/daughter version of Hansel & Grettle. (Equally breadcrumbless, but with Grettle - still high from the thrill of the chase - repeatedly trying to bolt in random directions.)

This was symptomatic of the biggest challenge in transitioning to a state of multi-childdom. During their waking hours, unless you’re in a heavily-padded confined space, you both need to be on duty all the times. For example, we recently went to Cyprus... Every morning we’d go out to the pool and set up our loungers. Within ten seconds the kids would both walk off in different directions. I’d head after one, my wife the other. By the third day we didn’t even bother laying our towels out properly - we certainly weren’t spending any time lying down. 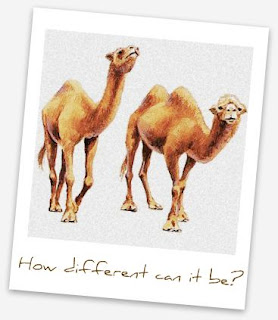 When one’s contained, e.g. strapped in a push-chair, one of you can switch off. But the kids need/want to roam around so, unless those remote-control electric-shock dog collars turn out to actually have positive physical & psychological effects when used on humans, pool-side holidays with multiple toddlers will continue to involve tailing your allocated kid(s) while they attempt to stumble into the deep-end of the pool / eat soil / commit minor acts of inflatable-toy larceny.

Also on the trips & holidays-front, as soon as we had our second child we were back to travelling heavy. It was a squash to go anywhere in the car with all the gear. And I'll never forget the first time we tried to get through airport security with a load of bags, two children and no knowledge of the fact that you actually have to take the baby out of the buggy and put it through the x-ray machine*. No-one's got enough hands for that.

In the hungover-morning situation, with one little child there’d probably be a nap-break at some point (when I’d take the chance to lie down, moan and pass out). Even if there wasn’t, it’s a lot easier to look after and engage a single kid. With two, you're dealing with demands at pretty-much every given moment. And while I (like a chump) remain able only to be in one single place at a given time, there’s always the potential peril of chaos erupting in two parts of the house simultaneously… while one’s nearly choking, the other’s hiding your keys; while one’s weeing on the floor, the other’s throwing milk-drenched breakfast cereal with unerring accuracy at your laptop.

I guess, if you want multiple offspring without having to deal with a prolonged lack of relaxy-time, you could wait until the first one’s big enough to be a bit autonomous. But there’s a lot to be said for having siblings of a similar age. And, the fact is, we're probably only facing a couple more hard years until they’ve both got a bit of self-sufficiency (though no-doubt there’ll be other challenges as they get bigger).
We are definitely done now though. Two is enough for us. (I’d never be comfortable relying on zonal marking. I need the comfort of reverting to man-to-man when things are tough.)
This has, however, led to another thing that I didn't have to worry about when we only had one child... the looming prospect of The Vasectomy. Shudder. More on that another day…

Learned Wisdoms
#28: Having the new baby 'bring their older sibling(s) a present’ is a nice tip to limit the initial animosity and jealousy. It’s pretty unbelievable though. And, if you do leave a big gap between your kids, you’ve got to worry that there’s a point where cognitive development doesn’t allow it. Not sure what age that’s at. All I can confirm is that a 26 month-old doesn’t have any problem with the idea of a woman giving birth to a baby that comes out bearing a nicely wrapped scooter.

#29: If you’re the first-born of three children, you will suffer a bit from being the one that’s most-able to be left alone. This is particularly notable when looking back over those photos you get from rollercoaster rides... your dad & your younger sister waving; your mum & your little brother screaming with delight; you, fighting G-force to lean away from the creepy & unhygienic-looking stranger.

* The buggy, not the baby. Obviously.
Posted by dadulthood