Baby Windsor and the ‘Twit’ of Auburn

The pregnancy announcement last month and, in particular, the news that Kate Middleton-as-was had gone into hospital for morning sickness treatment from “her main doctor and the royal gynaecologist” started me wondering about likely differences between my kids’ childhoods and that of the current-foetus/future-ruler. (It seemed my wife didn’t even have a ‘main’ doctor during the births, never mind the pregnancies… and when she had morning sickness she got off the train to vom, then carried on to work.) So, as and when note-worthy comparisons arise, I’ll cobble a post together.

Before I start, these aren’t “silver-spoon… look what they’ve got, aren’t they lucky?” thoughts. I certainly wouldn’t wish on my children the constant attention and long-range pixelated-boob-shots that the Royals have to put up with. I’m interested in the way different experiences shape people’s view of the world. I care very much about the opinions my children grow-up holding and I think we’ve all got a vested interest in how Baby-Widdleton turns out (even if you think it’s a purely ceremonial position, you’d surely rather avoid any future international embarrassment from, say, another Prince Philipish casual-racist).

[For complete transparency, it’s worth stating now that this Royals vs Suburbanites framework may not actually turn into a series. It might turn out just to be a one-off, purely used on this occasion to provide some structural credibility for a story about the word ‘twat’…]

Prince William likes his sport. You often see him in the good seats at big rugby matches. And he did a great deal for our fruitlessly-uncorrupt 2018 football World Cup bid. So no-doubt he’ll be taking his first-born to his/her first game when they’re old enough. As I did. Though I doubt the experience will have much similarity...

I took my little girl to watch Huddersfield Town FC for the first time a few weeks ago. Away at Charlton Athletic. Everyone knows language can be a bit industrial at football but, for her first visit, she unfortunately experienced a perfect storm of swearing.
At kick-off there was a big argument around us between all the lads stood up behind the goal and all the people sat behind who subsequently couldn’t see. The bloke right next to me was shouting at the top of his voice, spit flying. My little girl looked at me, wide-eyed and exclaimed “Everybody’s swearing!” In the end it got to that point where even I - who believes that there’s some environments, this being one of them, where people shouldn’t be frowned-upon too much for dropping the odd sweary-bomb - had to ask the guy to tone-down his language… then, after half-an-hour, one of our players got sent off and even I was up on my feet effing! (I don’t want my daughter to think foul language should be encouraged, but he clearly got the ball). 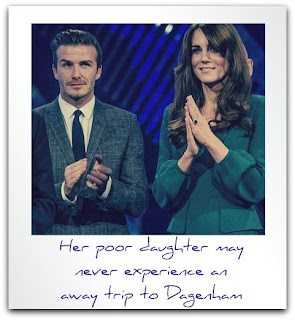 All this didn’t concern me too much. Anyone who thinks they can protect their kids from hearing swear words once they’re going to school is dreaming. My daughter knows of “f*ck” and “sh*it”, but she knows they’re bad words and that, as she wisely pointed out to me during the game, “people shouting them look like idiots”. Unfortunately, she then learned a new word… a bloke behind us shouted “linesman, you ginger twat”. My daughter, not knowing what it meant but clearly liking the sound, jumped to her feet, pointed and shouted “ginger twat, ginger twat, ginger twat”. Everyone around us creased-up laughing (including the bloke next to me – credit to him for not asking me to tone-down my daughter’s language). I had to tell her it was a bad word. She was mortified – gasping and covering her mouth with both hands – which happily gave me some confidence that I wouldn’t soon be getting a call from her teacher telling me she’d dished out slurs to a crowded classroom (and so far, so good).
Anyway, the point is, you probably don’t get exposed to that language quite as much in, say, the hospitality seats at rugby union. But, on the other hand, you probably miss out on the occasional moment of highly-concentrated euphoria…

With 90 minutes up and the team 0-1 down, Huddersfield got a penalty right in front of us. (No one complained when everyone stood up at that point.) I picked my daughter up so she could see. She shouted “Kick it in the net”. Our player duly did. The stand erupted and my little girl repeatedly shouted in my ear, “YEEEESSS! I TOLD HIM TO KICK IT IN THE NET!!!” She was pleased as punch and I’m pretty sure she’ll never forget her first match - and the belief that she deserved an assist on the equaliser for her tactically-masterful suggestion.

Upon leaving, I could see the benefits of a Royal lifestyle. I was around the protocol lounge of the Olympic Stadium at the end of the Games Closing Ceremony* and saw Kate & Prince Harry being whisked away to their waiting escorted car. After her first match my little girl had the luxury of riding on my shoulders out of the ground, but then the luxury-lacking experience of waiting on a crowded platform to get on to a palpably overcrowded train.

Conclusion
I think it’s great that the wee Windsor is likely to appreciate sport and witness some great moments around the world. Always being in the expensive, non-partisan seats will probably mean he/she never quite experiences the atmosphere of a consistently unheroic team’s packed stand when, with only 10-men, they equalise in the last minute… but that’s just a cross they’ll have to bear. (Although, unless I somehow end up the kind of man who gets chauffeured away from things in waiting escorted cars, my daughter might also miss the odd last-minute winner in my later years when, as a grumpy old man, I decide I’d rather go 5 minutes early than plod slowly through the crowds.)
While I like the idea of the future monarch being ‘one of us’ and having sat in the away end at Charlton or Millwall (or, quaintly, stood at Brentford), I don’t believe you miss a huge insight into society by not experiencing this – just occasionally watch the footy on mute with Shameless playing loudly on your laptop in the background.
From watching sport with me, my daughter will probably grow up with increased patience in slow-moving large crowds, increased tolerance of being in close proximity to badly-articulated angry shouts and reduced fussiness about pie quality. I think these are solid traits… however, they probably aren’t that useful if you’re the queen or the king.

Learned Wisdoms
#48: If you tell your mother-in-law a story about your daughter having used the word twat and she pauses for a moment then asks you, “What does twat mean anyway?”, I can confirm that - when giving an explanation that offers no escape from use of the word ‘vagina’ - going very red may be uncomfortable but feels totally appropriate

#49: If it becomes clear that your mother-in-law isn’t aware of the meaning of the word twat, in fact having thought it to be “interchangeable with the word twit” and having actually “been using it all over the village”, don’t assume this is amusingly uncommon. When you jovially tell your sister, you might be told “Our mum & dad thought exactly the same, I had to break it to them that it was swearing”

#50: Your wife will never give you a hard time about taking your daughter to the coarsely-languaged environment of a football stadium once she’s indulged their shared love of dance by showing her Billy Elliott, aware that it’s a 15 certificate, but having forgotten just how incredibley sweary it is
Posted by dadulthood