Be In The Moment (When You’ve Got Time)

It’s nice to enjoy your life. (Strong opening Captain Obvious.) Yet my wife & I sometimes wake up on a Monday morning, talk about getting through the week and slip into routine as if there’s no actual life-living value coming our way until the weekend.
Buddhists reckon being in the moment is of great importance on 'the path to enlightenment'. They call it smṛti or sati, which translates as mindfulness.
My over-simplified-to-the-point-of-being-borderline-xenophobic understanding of it is that you enjoy the main course more if you focus on your chicken rather than wondering about whether there’ll be a chocolate option for pudding.

There’s definitely something to be gained from this mentality. How often has your mind been elsewhere when you could have benefitted from engaging with your surroundings? Whether it’s paying no attention to a conversation with your partner because you’re pondering a work situation; not fully relaxing to enjoy a film because you’re thinking through potential childcare options for a future commitment; or missing some interesting insights in a work meeting because you’re wondering who’d win a fight between a large grizzly bear and a medium-sized white shark in the shallow end of a swimming pool.
We all do it (except maybe that last one) and you don’t have to be the Dalai Lama to realise that we’d get more out of each day, and out of our lives in general, if we spent increased time appreciating what was happening now.
But that’s easier said than done. Especially if you’re stressed. And particularly if you’re concerned that your collective moments maybe aren’t shaping up to deliver everything you’d hoped for from life…

I’m ashamed to admit it, but there have been plenty of occasions when I’ve not made the most of time with my children because my mind’s been elsewhere. I love the kids, they’re the best little people I’ve ever been affiliated with, but I’ve got two big challenges with mindfulness:
i) I’m a planner. And without being safe in the knowledge that everything’s in-hand for the success of future moments, I have a hard time concentrating on this one. (And, yes, I generally ruin those future moments by worrying about the ones after that anyway.)
The only way I’ve found to avoid this is to block out a short time each day to plan whatever needs doing and make a list of the required actions. Then, for the rest of the day, if my mind starts to wander towards planning I can reel it back in… because I’ve already planned when I’m going to plan.
(Totally justifiable to speculate on how my brain hasn’t exploded yet.)

ii) I’m terrified of wasting my life. Whether it’s something genetic, something from my upbringing or just that I already threw away a significant lump on the TV show Lost, I’m often more aware of what I’m not doing than what I am doing. (And, when you’re working full time and have two kids, there’s a lot of stuff you’re not doing.)
This mind-set was making me quite depressed for a while. The solution I found was to identify exactly what I wanted in my week-to-week life so that time outside work felt well-rounded. My wife did the same. My list was:
- Plenty of time with the kids & quality time with my wife
- Dinner/drinks with friends at least every couple of weeks
- Writing
- Sports & Exercise. Weekly football / cardio / weights. Tennis / hit some balls on the driving range / horse riding every few weeks (see Learned Wisdom #17 below)
Clearly the problem is finding time to fit everything in. Particularly as, after woring all week, we want to maximise our time with the kids during their waking hours. Realism had to bite, and get really good at skiing, improve my Spanish, learn rhythm guitar have been left on the shelf for now. Everything else on my list (and my wife’s) we are finding a way to fit in. Generally by getting babysitters in the evenings (e.g. we were surprised to find that, during summer, we can get a canter-out together from a local stable once-a-month in a Wednesday 8pm-9pm timeslot after we’ve put the kids to bed), but also by doing things like cycling the work commute for cardio a couple of times a week (so that I don’t have a weekend-time trade-off of be with the kids vs go running).
Knowing that there is space for my stuff in the weekly/monthly routine (even though some things aren’t even that frequent) means I worry about what I’m not doing much less. 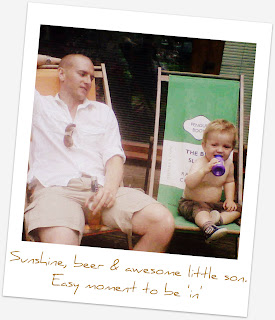 Now I'm generally in the moment a bit more and I frequently, as Woody Harrelson instils to Jesse Eisenberg in the brilliant Zombieland, enjoy the little things.
(Not every tip for getting through life on an earth where zombies are the dominant species is as applicable to a life with children… actually, see LW #18 below.)

Obviously my life hasn’t suddenly become entirely populated by sunshine and lollypops – if I’ve got something stressful going on at work it’s hard not to have it dominate my thoughts that week – but when I’m with the kids I am finding it much easier to focus on just enjoying that time with them. And it’s dead nice.

#18: A surprising amount of things that are good rules for surviving a post-apocalyptic zombie-ruled world are equally applicable to surviving life with small children. For example:
- Be swift and vigilant on the toilet. Something could burst in at any moment
- Come to terms with the fact that you may never see your friends again
- Always carry antiseptic wipes
- Get used to eating fast, you’ll most-likely have to move quickly very soon
- The putrid smells you encounter every day can be lessened if you breathe through your mouth
Posted by dadulthood