Men Are From Earth, Women Are Also From Earth (Where No-One Enjoys Tidying Up)

I just spent 15 mins folding and putting away clothes. It wasn’t awesome. I would have rather done something fun for that quarter-of-an-hour and let the heap on the landing grow for a couple more days. However, tidying-up the clean washing (within specified post-drying timelines) is a job I signed up to in The Anderson Peace Treaty of 2010. Before that, a lack of appreciation for each other’s priorities was causing a few household skirmishes…

Despite my natural tendency for a bit of cosy mess, I have always put effort into ensuring my children grow up in a nice environment, free from e coli, strangle-hazards and potential falls-from-height. However, in the early days, my wife would have described my contribution at home with words like "lazy", "self-centred" and "f*ck-knuckle".
Essentially, there was a sizable gulf between my view of acceptable commitment to house work and my wife’s perception of the required efforts.

This was largely because, while I was still merrily oblivious, she had recognised the extent to which our non-child-based leisure time was restricted by having a kid alongside a career each.
Her earlier acceptance of this was probably because women are forced to start coming to terms with constraints and sacrifices the moment they get pregnant:
No alcohol/pâté/rollercoasters > No energy > No lean torso > No comfortable position to sleep in > Huge physical trauma > No break from being the dedicated nutrition-facility for a small human
… whereas a man’s journey over that same period tends to be:
Gain designated driver for nights out > Get 2 weeks off work
(It's little wonder we're a bit behind at first.)

When my wife’s maternity leave was over, we divided the household chores roughly in half and both kept largely on top of our stuff. However, maybe due to some maternal nesting instinct thing (or perhaps because it’s pretty standard to not want sh*t strewn all over your house), it became clear that my relaxed attitude to clothes-putting-away was really infuriating my wife. And I couldn’t understand why she wanted to spend all our free-time ration doing chores instead of enjoyable stuff. 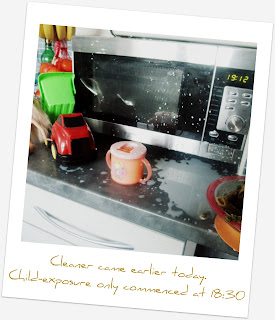 Eventually I came to terms with the fact that there just is a load more stuff to do in the house. It still feels like Norris McWhirter should be appearing to verify my record-breaking stats on weekly volume of garments returned to wardrobes, but I get why the amounts are exponentially higher than when you’re just a couple. (Post-birth, not only are there all the baby’s little costumes, your things also need washing more frequently due to constant non-specific baby-engendered soilage.)
It only takes a couple of day’s neglect before our house starts feeling like the inside of an arcade 2p drop-down. So, until we earn enough money to employ a maid or (ideally) a team of trained cleaner-monkeys, I should probably keep trying to deal with my little jobs before I have a work-out or sit down to watch telly. But, on the flip-side, my wife also recognises that, to avoid going mental, there’s got to be a reasonable point each evening where we both stop and relax.

Learned Wisdoms
#15: If someone at work says you look "a little bit tired and out of shape", complaining about this to a woman who’s carried a human for 9 months, pushed it out of her vagina, been up in the middle of the night breast-feeding for 6 weeks and can no longer go for a run without a-little-bit-of-wee-coming-out is not a strong move.
(The scene ends badly, as you might imagine, in a cavalcade of anger and fear.)

#16: In the division of house-hold chores, put the bins out is generally a good one to pick. It’s perceived as a high-value deliverable, but actually only takes a few minutes.
However, if you live in a suburb where foxes frequently rip open bin bags and scatter the contents all over your garden, you may want to think twice about signing up for it. Particularly if your wife is a good negotiator who can easily make a strong case for pick up the disgusting bin-mess that’s covering the entire lawn being an implied sub-task of bins out.
Posted by dadulthood