About 4 weeks ago, illness began to rampage through our house. Like some kind of tiny army capable of travelling airborne from target to target and able to survive independently on surfaces for 2 hours or longer between enemy contact. Only not as far-fetched.
It’s inevitable that children will get sick now and again, given they spend their days hanging round with other children, all of whom are filthy. And home they come. Like Trojan horses that you know are full of bad things, but which you still bring inside because you love them (and/or because it’s generally frowned upon and gets a bit awkward to refuse their entry).


There are minimal steps you can take to isolate yourself from getting it. You can only hold your breath for so long. And the idea of setting up your spare room as a kind of solitary confinement with meal slot is apparently “a bit weird”.
So you get sick too. A friend of ours, prior to having children, had contacted maybe three tummy bugs in her life. Now she says it’s an every-other-month visitor. The proportional change in the frequency of getting sick pre/post becoming a parent is the inverse of what happens to the frequency with which you can: have a lie-in; dose yourself up to the point where operating heavy machinery would be discouraged; spend the day relaxing and doing nothing… i.e. all the things you need to do to get over sickness quickly. So it lingers.


This time round our little girl got what we believed was scarlet fever from our child-minder’s son. Not fun but, while it would have meant death in the 1800s, it’s easily curable today – yet another reason why it’s better to live in the 21st century than the 19th (once fashion’s cyclicality brings back the buxomly-corseted look, days of yore will really have zero advantages). Anyway, it turned out to just be a bit of a cough. A bad one, mind. And I was next to go down. (It’s impossible to conclusively isolate the moment I got infected, but having my daughter suddenly cough directly into my mouth while I was talking to her is suspect #1.) 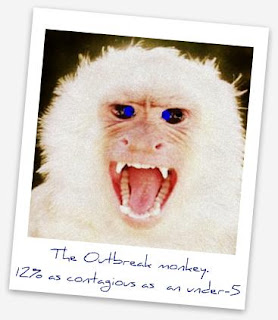 It’s hard enough trying to keep delivering at work when you’re poorly, but now there’s the added complication of looking after ill kids as well...
Our child-minder has three children of her own, including a tiny baby so, understandably, she doesn’t really want our children coming in her house when they’re bugged-up (even wearing the bee-keeper/scuba suit hybrid I suggested to contain their germs). So my wife and I have to compare diaries, work out who can least-disastrously manage to work from home that day, shuffle meetings around and do our best.
Trying to have a conference call with a pretty demanding 4yr-old at your side isn’t the easiest. Particularly if it turns out you’ve gone off-beat* with the mute button, meaning key bits of your input are missed but everyone clearly hears your daughter’s stipulations that The Gruffalo should be put on now and that juice needs to be served as a matter of urgency.


About a month later all four of us have been poorly with various periods of overlap. It took me in particular a frustratingly/embarrassingly long time to shake it off. But we were all just about right again by the end of last week. Just in time for the note from pre-school on Friday that numerous cases of head-lice have been reported in my daughter’s class…

Learned Wisdoms
#37: Even if you’re the staunchest of handkerchief-carriers the fact that, during times of sickness when you’ve your own and two little noses to deal with, you end up carrying three different types of mucus around in your pocket will cause you to reconsider the benefits of disposable tissues.

* No surprise, given it was my poor rhythm four years ago that kick-started the chain of events leading to the circumstances of the phone call
Posted by dadulthood No comments: