My little boy is two-&-a-bit years old now. He doesn't really talk like our little girl did at the same age and apparently he should have about 50 words by now.
He's got some, but not nearly that many. They include Daddy, Mummy, Milk, That, Ball and Are... he's definitely got "are", no question about it...

... I'm counting it!
(Now all I need is to source a series of songs that showcase each word in the English language at the end of their choruses, within his range of pitch.)

The doctor and health visitor both said he's probably fine, but suggested he might see a speech therapist as a precaution.


We haven't done that yet as he seems to understand and respond correctly when we talk to him ("Get back into bed"; "Stop doing that"; "Drop it into 3rd, get your foot down and overtake that Volvo"; etc.) and the words he knows, he uses in context.

The health visitor suggested one of the things I might want to try is holding his head still in front of mine (so he has to look straight at my face) and saying words so he can watch how my mouth moves as I pronounce them.
I tried this while we were sat on the side at the swimming baths as his sister had her lesson. I showed him my pen and exaggeratedly mouthed "PEN" at him (somehow making it about five syllables). Then pointed at the water and told him "POOL"... he didn't say anything, but he snatched my pen, ran and threw it in the water. I couldn't fault his logic.

This concern has made us think about the fact that he gets slightly different attention from us than his sister did at the same age (when there was just her). In the bedtime melee we've tended to read her a book but not him. And she often gets the choice of show when they watch TV... meaning he doesn't see as much of the little kids' gobbledy baby-talk programmes that may (or may not) help with language development.
So we've addressed that... I really like reading him stories, but I'm not that keen on having Iggle Piggle back in my life (that guy is a liability - I'd hate to work with him... Macca Pakka, on the other hand, I'd employ in a heartbeat - great work ethic. And very clean). 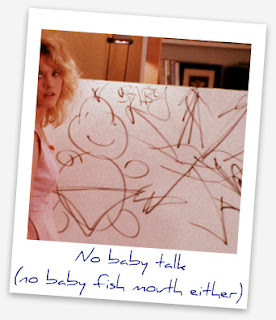 We're not really too worried... as Michael McIntyre says, it's not like some girl will be introducing my son to her parents in 20 years time and all he'll be able to tell them is "MILK. BALL!"
In fact, I'm actually getting suspicious that he can speak fine - it just suits him not to... Subconsciously, we maybe treat him as slightly younger and don't discipline him as much for things like hitting as we would if he could communicate. His sister has picked up on this and has taken to reminding me, "Daddy, when he can talk, don't forget to tell him off for all the naughty things he has done to me so far". If he's clocked that, no wonder he's linguistically reticent.


The other thing that's potentially in-play is that he's more exposed to Portuguese than our daughter was. Slight childminding-arrangement-changes mean he spends more time than she did with our childminder's Portuguese mother. Apparently children exposed to multiple languages at an early age pick them both up but are slower to start talking.
It doesn't seem to have had a major cultural impact though - I was telling him about Chelsea beating Benfica in the Champions' League the other night and he didn't seem bothered either way.

It's all too easy to worry unnecessarily about development. But, the fact is, there's nothing significantly wrong and he'll no-doubt catch up.
I'm a little impatient though, as I'm really looking forward to hearing what he has to say about things. But on the other hand, if he talks as much as his sister did between two & three - and with similar value-of-content - I'll probably look back on this as a relative period of golden tranquillity.


Learned Wisdoms
#38: Much as you might want to, you can't claim that your son can say "I don't want to" if he only pronounces it via the action of throwing whatever's in his hand at your head, lying down and crying.
Posted by dadulthood 2 comments: