My little boy’s speech-development, first mentioned in an earlier post, didn’t catch up quickly as we expected. In the end, with mild concerns of autism, I took him to see a speech therapist - just to check everything was ok and to get some tips on helping his development.
It was reassuring.
He’s what they call “a child of his own agenda” - while he can play happily with other people and pick up their language, he’d just sometimes rather not*. Mainly because there seems to be something else he prefers… Here are some extracts from the therapist’s report:
“He was reluctant to leave the toy farm and begin an adult-led activity. However, when the toy horses were moved to the table top, he did come and sit as required.”
“He happily attended an activity of his own choice (he particularly enjoyed playing with the toy horses for a long period of time)”
“He produced many single words during the session e.g. ‘horse’ and ‘horses’”
“Less horse toys should be visible at future sessions” 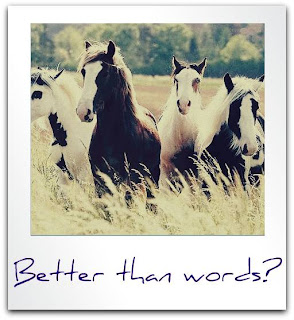 He’s confirmed as showing no signs of autism - the problem is just his small vocabulary, rather than any reluctance/inability to chat (which is consistent with him not coherently being able to tell me he’s hungry, but being fine telling me “Go big on Frankel’s final race Daddy, it may be the softest going he’s encountered and the odds are a miserly 2-11, but he is just unbeatable”**) So it’s a shame that he’s not going to rake in a load of money counting cards***… but he’ll hopefully be a good jockey or tipster instead.
We're trying extra-hard to help him learn more non-equine words and our new childcare arrangement, which gives him more 1:1 attention during the day, is also helping a lot. The switch to a nanny came about when our little girl finished nursery and started going to a new school, no longer the one where our child-minder’s children go, meaning logistics of that arrangement wouldn’t work…

Our daughter initially struggled to settle at new legally-have-to-go-now school. Getting dressed into the uniform and during the school run each morning there were lots of tears. There was also a lapse back into bed-wetting and sucking her fingers. We talked to her about both…
On wetting the bed, she was sad about it but didn’t know what to do because she just kept having dreams about going to the toilet and then waking up wet (I think we’ve all been there…)
The Internet tells me that, in dreams, “toilets can often link to bad experiences we have just had, emotional situations, and intense fears”. So it was hopefully just a matter of riding out the settling-in phase. In the meantime, I picked her up and sat her on the potty as I came upstairs for bed each night, meaning she was generally running-on-empty by the time latrine-dreams came. And having the potty upstairs proved useful all-round as our bathroom was out of action for a refurbishment at the same time.. (The only potty downside was this)

With finger-sucking, the timing was good as we had the encouragement of less/more presents at her upcoming birthday depending on behaviour (with the back-up of Christmas if it’s not totally nailed post-birthday).

In the end, everything settled down again within 3-4 weeks. She was soon running into the playground happily with her new friends, going on play-dates after school and generally being back to her old self.
It was nice that all this coincided with a slow period in my job, enabling me to be around for her more than usual (and to help my little boy learn more non-horse words… like zebra). My new job starts next week. Back to the challenges of two parents both working full-pelt…

* The irony of me having stayed home drafting this post on my own, rather than going on a works night-out isn’t lost on me
** That’s how it happened. I didn’t work alone. Honest. He made me do it.
*** Yes, all my knowledge of autism comes from the film Rainman. What of it?

Learned Wisdoms
#43: When you’re in a museum or aquarium and are asked for the hundredth time “Can I touch this?” by your daughter, your bubbling annoyance can be reduced by thinking about the fact that MC Hammer may have kids. And that this situation must be even worse for him.
[Looked it up, turns out he’s got five…]

#44: Caring about your children’s vocabulary and grammar is important, but planning to concoct your own “No, More Tears” shampoo out of lemon juice & vinegar as a lesson in the importance of punctuation is probably going a bit far.

#45: It does feel early, but it turns out that November is a fine time to start reaping the behaviour-improvement benefits of telling your children that, when the red light comes on the motion sensor in the corner of the room, "It means Santa is watching".

#46: If your daughter’s new class at school has 21x girls and only 5x boys, it’s certainly just a chromosome-related coincidence. You don’t need to start eyeing the admissions people with suspicion just because Jimmy Saville’s in the news.

#47: The school run is pretty monotonous. But mixing things up by dropping your child at a different school each day probably isn’t the answer.
Posted by dadulthood No comments: