Taking Back The Living Room

We didn't expect to have a nice, tidy, toyless lounge at this point, but it had got ridiculous. The corner of the room earmarked for toy storage was full-to-overflowing and toys were (even in 'tidy-mode') on all surfaces in all parts of the room, smothering it like those parasitic vines that cover trees and suffocate them of their tasteful decor, calmness and ability to sit-down comfortably.
It came to a head when, in a discussion about taking toys she'd grown out of to the charity shop (because there was no space for them), our daughter looked around the room and said "But there's space there" [gestures with both hands towards the small piece of floor between the sofa and the telly]

Time for a change... 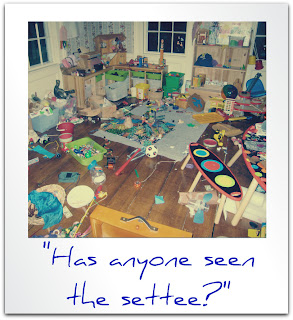 Our little boy recently got big enough to start sleeping in the bottom of the bunk bed. I'd taken his cot-bed out of their room and given it to friends. And into that space we moved the toy cabinet and 95% of the play-shrapnel that had been covering what was once a living room where adults could sit in the evening without being reminded of the film Big.

It was surprisingly liberating. And, added bonus, having more things to do in their bedroom when they wake up buys us a little bit of lie-in time on the weekends before they both slip out of their room, climb silently onto our bed and jump heavily onto our sleeping, unprotected bodies. (My default sleep-position has evolved into a lying-down version of the footballer-in-a-defensive-wall pose.)

Alongside ground-floor-reclamation, there's been a couple of other nice developments recently: 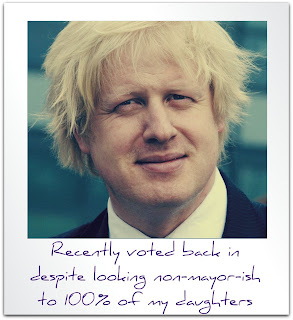 While the kids certainly aren't perfect (they frequently whine if I won't carry them; often have toilet-accidents; and are prone to dissolving when immersed in mercury), things have started to feel a bit easier recently. To the point where, after resolving toymageddon, I did even catch myself thinking "Well. Isn't this lovely? It's like the end of an episode of Quantum Leap where everything's fallen nicely into place. And things will probably just keep getting easier from here..."

Then my little girl ran into the room naked, jumped onto the sofa and gyrated around while singing "I'm sexy and I know it" over and over again.

Learned Wisdoms
#40: You'll be excited when your little girl enjoys doing karaoke with you on the playstation. Even more so when she graduates off the Disney disc onto the chart versions. Then less so when she latches onto Aqua's Barbie Girl and sings it repeatedly, i) because there's some pretty negative messages in there that may detract from her learning that a woman is not dependent upon anyone else to make her feel good about herself, that self-esteem comes not from others but from within, and that the pursuit of social acceptance should never drive us into degrading situations; and ii) because it's shite

#41: If your kids' increasing ability to do things for themselves is conflicting with carry-both-children-up-the-stairs-to-the-child-minder's-flat-every-morning being the cornerstone of your exercise regime, then recognise that the 'as they get gradually bigger, I'll get gradually stronger' logic doesn't actually seem to hold anyway (as your gradually more achy spine and gradually more clicky elbows will testify)
Posted by dadulthood No comments: