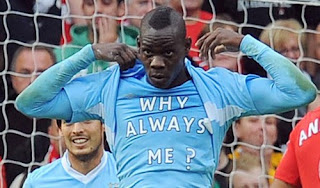 
The other week, one of my friends showed me this story.  For the click-shy it involves a picture of a baby crudely dressed up as ex-Manchester City striker Mario Balotelli, during the famous shirt-message incident (pictured).


The media and twitter reaction to it was one of great vengeance and furious anger*, with a lot of comments about child cruelty.


I don’t see how it’s physically cruel. No baby is getting hurt by having a sponge balanced on its head. And no child is going to complain about having chocolate spread smeared anywhere near their mouth.
He must have been significantly more comfortable than her: 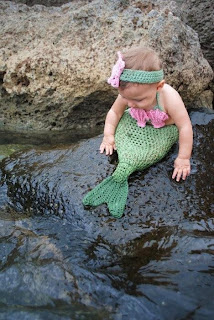 … and less at risk of drowning in the North Sea. But the mermaid costume would never generate ‘public outcry’. (In fact, likely-to-cause-mild-chaffing though it is, between typing I’m searching Amazon to get one for my daughter now)


Anyway, this started me thinking generally about what it is/isn’t ok to dress your kids up as, and specifically about the reaction to the Balotelli incident.


Initially my hypothesis was that any fun fancy dress is ok unless it contravenes the following rules:


RULE # 1: Should not be painful/cruel/demeaning to the child


RULE # 2: Should not highlight an undesirable characteristic or unfairly-stereotyped/bigoted view of the subject
So, let’s test this with some examples…

This is fine. The costume is cool. And despite the fact that we all like to poke a bit of fun at the Gamma Quadrant folks of Sector 4 and their crazy bureaucratic dedication to the rules and bi-laws of Star Command, you wouldn’t call it offensive (except maybe if you’re Zurg or one of Zurg’s relatives). Next...

Under my initial guidelines this isn’t ok. The costume clearly highlights an undesirable physical characteristic of the subject. He is fat. However, experience and common-sense says no-one would have any problem with that costume. Picking on the big, lardy plight of an over-privileged white man in a position of power – even one with the exercise-discouraging plight of unlimited free public transport - would stir anger in no-one**.  Which suggests a reduction of rule two…

RULE # 2: Should not highlight an undesirable characteristic or unfairly-stereotyped/bigoted view of the subject.
… and I think I’m ok with dropping the ‘undesirable (but true) characteristic’ clause. Fat-phase soon-to-die-on-a-toilet Elvis costumes are socially ok. I’m probably even open to an extreme-uggo line of costumes. Like a John Merrick. (That’d be pretty impressive actually. Not sure what you’d make it out of. Paper mache and corned beef?)
Let’s cut to the chase. The problem here was that the baby is white and Mario Balotelli is black. The discomfort is with the idea of a white kid colouring their skin to dress as a black celebrity/character.  So…

Is cross-racial fancy dress completely taboo? And, if it is, how do I explain ‘why’ articulately to my kids if/when they ever want to don one of the plethora of brilliant black person/character fancy-dress options?
Unsure, I did a bit of reading to get a view on the history and the public opinions in this area. Here's the conclusions I drew:

... clearly, the question is specifically around a white person painting themselves to ‘play’ a black person.

… and the last thing any similar Jumbo McSpazzatron needs is a chance to misunderstand that ‘minstrel culture' might still be socially ok. (Plus, if any person who doesn’t know you - black or otherwise - sees your child, how are they to know you’re not a lizmachin?)
So, even if you’ve got solid intentions with brown face paint, think twice about it and certainly don’t show it off in public.
Aside from face paint, the derision that met Prince Harry when the public saw pictures of him dressed as a Nazi also supports Rule 3. However, the Romans did some pretty unspeakable things in their day***, but I’ve seen plenty of Julius Caesar costumes and no-one gets upset, so it seems like there may be a statute of limitations on this rule.
With the data I have available, I can say for certain that it’s somewhere over 70 years (Nazis: not ok), but under 2000 years (Caesar: ok).

Generally, if the costume is specific and genuinely funny, there’s little chance that any balanced person would find it offensive. If it’s a bit rubbish then, regardless of potential offence, you shouldn't be making your kid wear it. Fancy dress is brilliant - make an effort!
RULE # 4: Make sure it’s a really good costume

So. There you go. Here’s my initial schema for child fancy dress success…
RULE # 1: Should not be painful/cruel/demeaning to the child
RULE # 2: Should not highlight an unfairly-stereotyped/bigoted view of the subject.
RULE # 3: Avoid representing something horrible that affected the lifetime or family-memories of people who might see your child (this rule dissolves somewhere 70-to-2000 years after said event)
RULE # 4: Make sure it’s a really good costume
I’m no expert though (most of my ‘research’ came from wikipedia and mumsnet... and the film Bamboozled), so any other thoughts are very welcome.
Learned Wisdoms
#52: If you initially hypothesise that it’s not ok for a white kid to dress as a black person purely due to black people previously having been victims of repression, you’ll find that this example calls that line of thought into question:

... Jessie is a woman. And a ginger. A walking-fusion of two groups that each historically score high in the Top Trumps of societal repression and castigation. And it’s fine to dress up as her. (However, if there’d ever been a Red & Freckled Minstrels Show, trading on hot-tempered, easily-sunburned stereotypes, maybe we’d all be more reticent to put on an orange wig)
#53: If your white son wants to dress like Mr T and you decide against face-paint, make sure you do a really good & clear job on the mohawk - otherwise the ‘white-version’ of the costume, given all the jewellery and casual sport/combat gear, is a pretty close approximation to Jimmy Saville. Which is a much more significant breakage of Rule #3

Footnotes
* Which made me laugh. Because who gets FURIOUS about some minor news item they happen upon?.. Then the next day I read this and instantly transformed into Malcolm Tucker

** Anyone suggesting that he calls ‘himself’ The “Fat” Controller and so is obviously ok with his gluttony should think twice. There’s no evidence that he made the nickname up - more likely just begrudgingly went along with steam-delivered mockery, vainly hoping it’d go away if he didn’t react. (Probably leading to a cycle of self-loathing and comfort-eating that exacerbates the situation to this day – watch out for the residents of Sodor soon starting to refer to their ‘Morbidly Obese Controller’ who gets cleaned at the same time as the engines with a hose and a broom)

*** Not many people know that the full phrase is “When in Rome, do as the Romans do... but try to avoid the whole ‘killing a hundred-thousand Christians’ thing”