Summer of Sport, Autumn of Change

Brilliant summer. Few changes on the way now in our house...

Change 1 - New school
We got our little girl into the school we wanted (the one associated with the church we go to - see learned wisdom #22 on this post). She starts in September. Great news, you'd think. It has much better Ofsted than the school where she currently goes to nursery and the kids tend to go on to better upper schools, which hopefully has a positive impact on her options. However, all her little friends are staying at the current school and she's really sad about not moving on with them. Also the school she's moving to is very one-dimensional class & culture-wise (all white, all middle-class, all the time). My wife and I were starting to wonder if we'd made the wrong call, but a couple of minor funny incidents eased our minds:
-- I was talking about this conundrum with a friend who has a daughter in the school where my little girl currently goes to nursery. She said the school was generally good, but there were a couple of things that weren't ideal. When I asked for examples she said her daughter had come home recently and proclaimed, "I've got a boyfriend..." Ok, thought my friend, 5's a bit young, but not the end of the world. "... He's also going out with Diamond. But I'm his best girlfriend."
-- Next up, we were on a long journey up from London to my parents' in Yorkshire. As we got on to the M62 and into yet more jammed-traffic with 5 hrs of travel already behind us, my little girl shouted, "When will we get out of this BLOODY car??" [Admittedly I can't forensically trace that back to nursery school friends... she may have picked it up at home]
-- Another day, she was doing some sort of generic misbehaviour. I responded with some sort of generic instruction to stop. It then got interesting when she said "You're not the boss of me. Jesus is the boss of me." The current school is heavily catholic. I like the idea of her having faith... but not to the point where she won't recognise all the necessary layers of earthly middle-management.

Change 2 - Childcare solution
Our childminder went on holiday at short notice for two weeks. We scrambled around for cover and ended up with a temporary nanny...
It. Was. Amazing...
Time in the morning with the kids was suddenly nice because we could just talk to and play with them without the stress of dressing them against their disproportionately-strong wills (pretty sure experience has qualified me to get any similar-sized angry creature into clothing, even the difficult stuff - if you need a badger forcing into a swimming-costume & cap, or an otter squeezed into a leotard, just give me a shout... I won't ask any questions). Plus there was no job of dropping them off at the childminder, so every morning suddenly felt loads more relaxed. As a result we're going to bite the bullet on the extra money and switch to a nanny from mid-September. Though the situation may change in November based on...

Change 3 - My Job
For the last two-&-a-half years I've been working for the organising committee of that big sportsday that happened in London recently. After the Paralympics and some wrap-up work, my contract ends in October. What next?..
With my daughter's schooling and my wife's career, I'm not in a position to move to Rio (next Olympics) or Sochi (next winter Olympics) or even Glasgow (next Commonwealth Games), so the looming option is a move back into a 'normal' corporate-type organisation. But there is the other option...
Given the amount that childcare costs each month, it wouldn't be an insurmountable dent on our income if I went full-time domestique*.  This came to mind when concerns about my little boy's speech didn't go away as easily as I'd hoped (more about this in the future). He's generally moving in the right direction, but me being around to ensure all the therapy techniques are being done 100% every day would provide a boost. (Though I do see a minor risk that after a couple of months he'd still be the same, with my vocab having massively-reduced.) 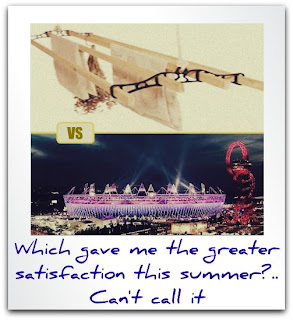 Another factor contributing to this run-the-house thought may have been when I recently got far too enthusiastic about the purchase, install and subsequent use a pullymaid (a rack you hang washing on then pull up to the ceiling with a rope/pulley-system). I'd like to say my excitement was about the better use of space in our house, removing the basically-permanent airer from our lounge and having washing out of the way above the stairs. Sadly it was probably more because the whole ropes/hoisting thing made me feel a bit piratey.
It's been interesting to reconsider the prospect of becoming a one-career family, but I don't think it'd realistically be a long-term solution. So I'll see how the job-hunt goes and take it from there...

* That's what I'd call my job in that situation at dinner parties. Give it a bit of a sporting, Chris Froom-style slant... hopefully I wouldn't get asked any follow-up questions.


Learned Wisdoms gets this month off, replaced by...
Dadulthood Notes on the Sporting Summer

#I: How cool was Bradley Wiggins? Generally the most laid-back, unaffected super-dad on the planet... Stepping onto the podium to be proclaimed winner of the Tour de France in front of half a million people on the Champs Elysees, having a microphone thrust in his hand and, with a straight face, saying "We're just going to draw the raffle numbers". And saying he wouldn't be going after loads more wins because of all the time required away from the family was quite nice (though he had just been away for around 7 months at that point... would like to hear his thoughts again after a few days of dinner-spillages and Dora the Explorer).

#II: Poland & Ukraine's Euro 2012 'kick racism back into football' campaign seemed a strange move. Good that it didn't really take off in the end.

#III: England were well-organised and probably the best team in Euro 2012 "without the ball". Unfortunately, that was a predictably unuseful skill-set in a penalty shoot-out.

#IV: Nice for Ivan Lendl to have coached Andy Murray to the equalling of his record... he's no longer the only person to have lost his first 4 grand slam finals.
(Great to see Murray win at Wimbledon in the Olympics. Hopefully a good omen for the future)

#V: That German Olympic Official could have avoided his opening ceremony salute being interpreted as a Nazi one by, er, not making it look like a Nazi one.

#VI: Great to see Nicola Adams' historic gold medal win in the boxing. And it has probably moved her up to being about the 8th hardest woman in Leeds.

#VII: Australia's boycott of the 2012 Olympics was unusual. And would probably have been more successful if they'd let people know what their demands were.

#VIII: The quality of guests on the sofa each night for the BBC's Olympics highlights show was great (Michael Johnson, John McEnroe, Kelly Holmes, Ian Thorpe, etc.)... quite funny how they were frequently asked to comment on sports they know very little about though. Kelly Holmes' insight on Cav & Team GB not winning the road race was along the lines of: I'm not a cyclist, but it looks like they got the tactics wrong

#IX: Not strictly sporting, but George Michael playing some 'new stuff' at the Olympic closing ceremony? Really? Hopefully he'll get a fuller Olympic experience by failing a drugs test and then being edited out of the DVD

Posted by dadulthood No comments: